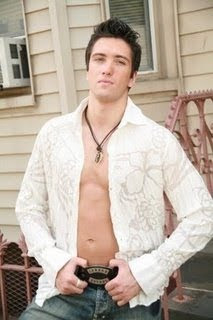 Dmitry Chaplin is an and an Emmy Nominated choreographer, best known for being a Top 10 finalist on the TV show. He was famous for constantly performing shirtless, with one solo routine having him rip off his shirt.
Chaplin partnered with HeidiGroskreutz and was a national finshed babe in US National Amateur Dancesport Championships in Provo, Utah that occurred on March 11, 2006. His dancing coach since 2004 has been Louis vanAmstel, who was partnered with actress Lisa Rinna on the U.S. show Dancing With The Stars.
n 2006, Chaplin was part of the top 20 cast on Season 2 of So You Think You Can Dance. His dance style was categorized as extremely masculine, and several episodes of the show featured parodies with other male contestants seeking Chaplin's advice.

Posted by Smooth Street Ballroom at 11:31 AM