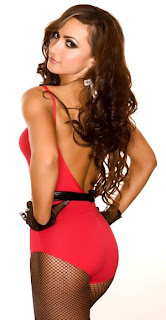 Smirnoff was a performer on the third season of the ABC series Dancing with the Stars with celebrity partner Mario López.